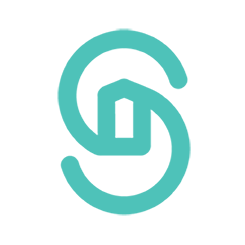 North, South, and everything in between

Among the most varied and sophisticated cuisines in the world, Vietnamese food is the stuff of culinary legend.

Its endlessly unfolding complexity is due in part to the S-shaped coastline, its ancient history, a diverse population, and a national heritage richly tangled with other histories and cultures.

Food as a celebration of nature is well and truly at the heart of Vietnamese cooking. 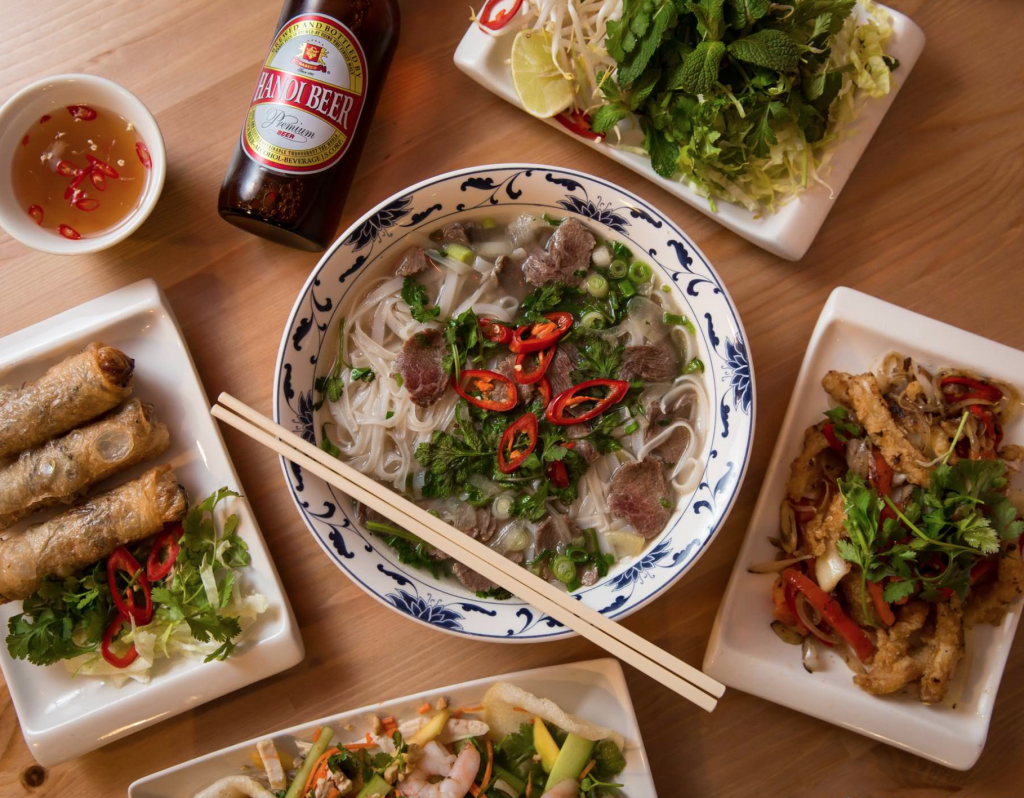 Pho is great, but not everything. Refrain from making pho puns while you’re here. Photo: Decoy Media

To delve into Vietnam’s regional cultures, history and everyday life, look to the use of spices and food presentation. Throughout this guide and throughout your time in Saigon, you’ll find that most dishes here fall under broader categories.

Bánh refers to the many steamed rice cakes and rolls (such as bánh cuốn), not to be confused with the bún family (rice vermicelli), which include both noodle soups (bún riêu, bún bò Huế) and dry noodle dishes served with fish sauce (bún chả). 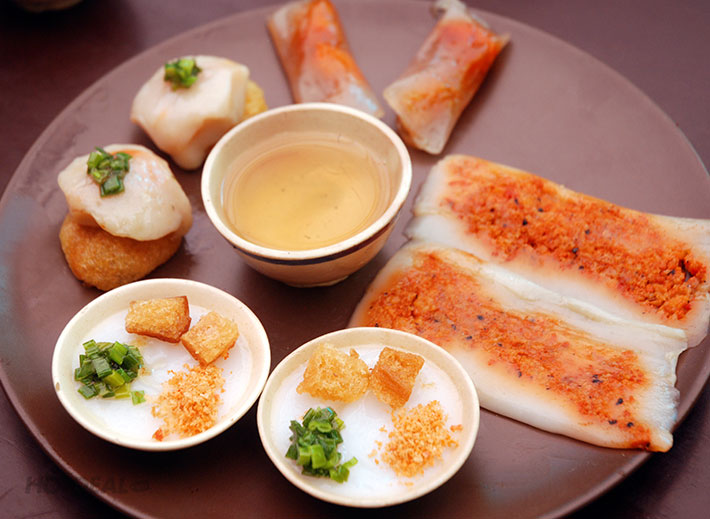 Northern winters are chilled by cold air from the northeast monsoons—this, together with a relatively high humidity averaging at 70%, creates a brutal, bone-chilling sensation even though the temperature hovers above 10°C/50°F.

Complex in ingredients but simplistic in flavors, northern cooking uses black pepper in place of chilies for spicy notes, with a generous amount of fish sauce and shrimp paste to inject more warmth into the meal. Pure and clean flavors reign.

In the more polished, French-influenced cities in the north, broths are clear like consommé, with few garnishes. 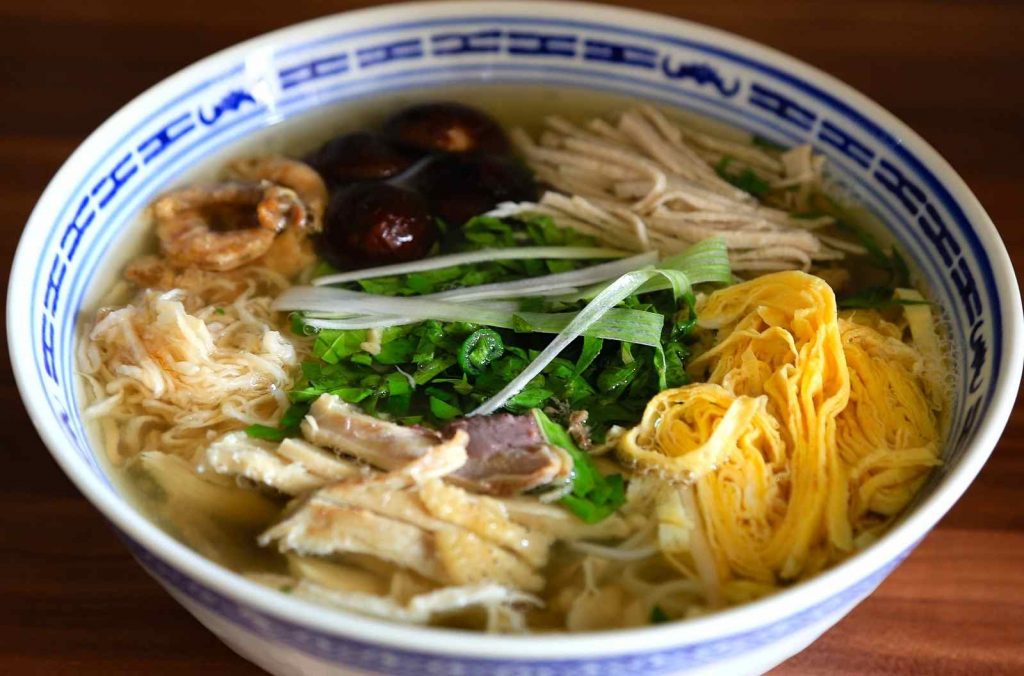 “Thang” means canh, the Sino-Vietnamese word for soup (as in, canh chua, the sweet and sour soup).

Vietnamese street food at its most exquisite, bún thang is as much a visual treat as it is a point of nostalgia for locals who moved away.

Our next dish needs no introduction: grilled pork patties served over rice vermicelli, a bunch of herbs, and fish sauce or nước mắm (pronounced nook mum).

Where to get it in Saigon: Bún Chả Phố Cổ, 225 Phan Xich Long, Phu Nhuan District 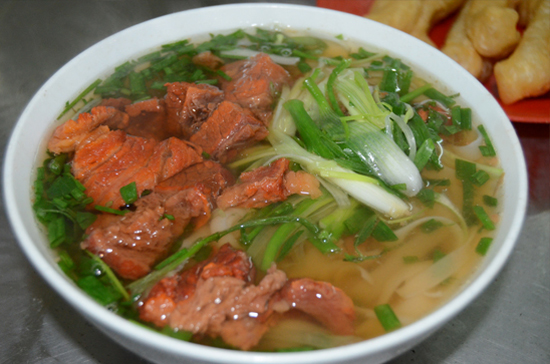 Beef bourguignon and phở, you ask? Instead of parsley, rosemary or thyme, phở bò sốt vang (or phở bò kho in Saigon) calls for warm spices such as cinnamon, star anise or cardamom.

Stewed beef in the light pho broth makes for a comforting dish that’s light on the palate, yet rich in umami flavor.

According to Uyen Luu, London-based food writer: “Beef pho was first created during the French colonial period as a Vietnamese interpretation of beef casserole…Legend has it that during French colonial times (1887-1954), a street vendor just outside of Hà Nội was one of the first to gather discarded marrow-rich bones, cartilage-rich oxtail and other undesirable cuts of beef. He poached them with a concoction of spices left by the Chinese (cloves, star anise, black cardamom), essentially creating a watered-down beef casserole. But being Vietnamese, not French, he had to have it with noodles.”

If you think common phở is overrated, treat yourself to a soul-warming bowl of phở bò sốt vang. A match made in culinary heaven, this dish is hearty and rich without being heavy—a true embodiment of Vietnamese cuisine in all its storied and vibrant history. 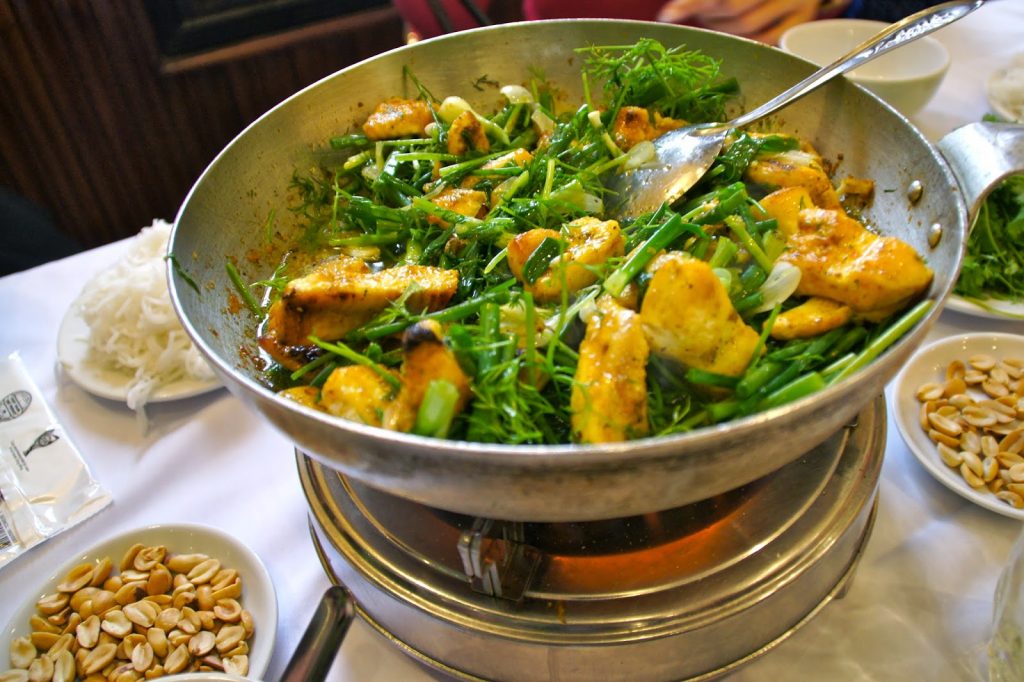 Chả cá Lã Vọng stands out in this list of Vietnamese food thanks to its ceremonial nature: it is a meal served exclusively at restaurants and cooked at your table.

There used to be a street named Cha Ca in the Old Quarters of Hanoi, where a home cook named Lã Vọng invented the dish. A proper chả cá meal involves an informal ceremony of tabletop cooking on little charcoal burners.

The star of this dish is the flaky chunks of cá lăng – a type of catfish native to Southeast Asia, well-loved for its firmness and subtle sweetness. The fish is marinated in turmeric, ginger, and galangal, then cooked with dill and scallions into golden goodness.

Where to get it in Saigon: Quán Chả Cá Lã Vọng, 36 Ton That Thiep, District 1 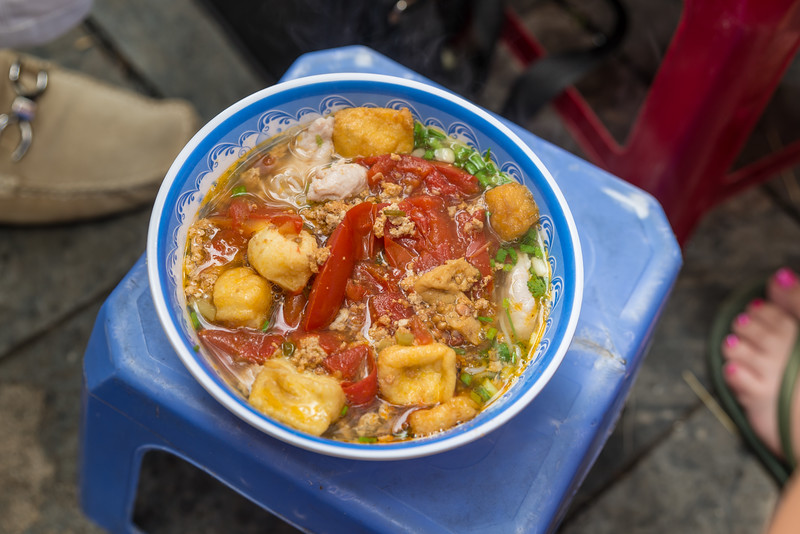 Comfort food at its best, bún riêu is made for slurping—a complex soup that’s unparalleled in its juxtaposition of textures and flavors: freshwater crab clusters are served alongside cubes of fried tofu, congealed pork blood, meatballs, snail, fresh tomato, scallion, basil, and dill.

There’re many versions of it everywhere in Vietnam, but a clear broth is a strong indicator that you’re in for an authentically northern treat.

Where to get it in Saigon: Bún Riêu, TK18/5 Nguyen Canh Chan, District 1 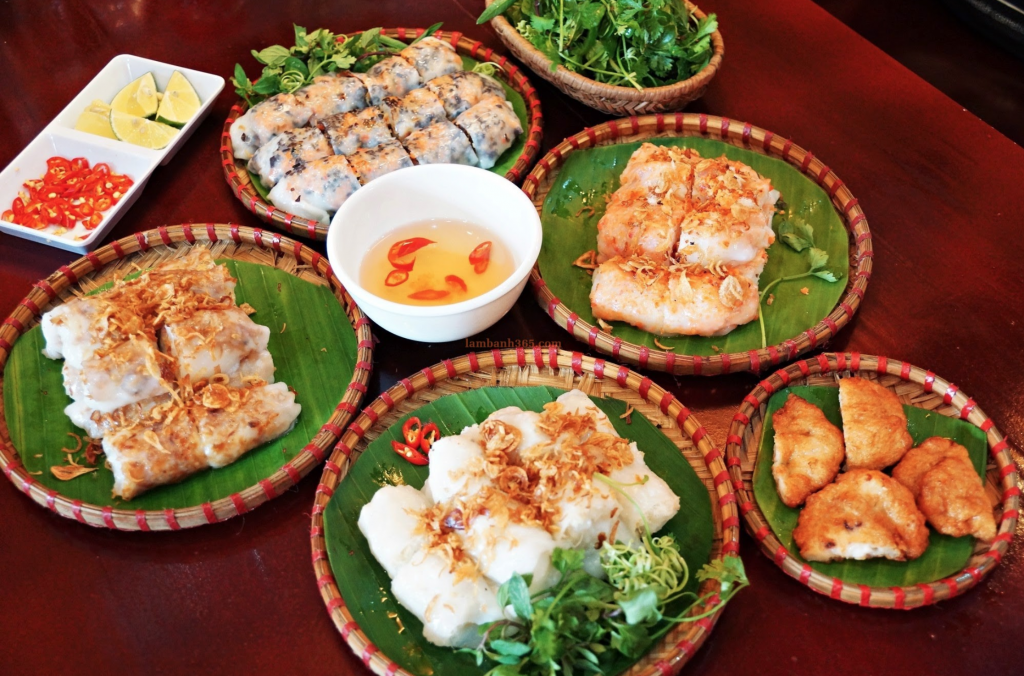 How the silken, delicate, almost translucent rice sheets get rolled into those is a mesmerizing scene in and of itself. There’s an egg yolk version, in which the sheet gets folded into a square, to be cut open like a raviolo.

Where to get it in Saigon: Bánh Cuốn Hồng Hạnh, 17 Nguyen Thi Minh Khai, District 1

Unparalleled in its refinement and sophistication, Hue royal cuisine is as much a cultural hallmark of the imperial court as it is a testament to the dynasty’s lofty sense of aesthetics. Signature dishes that you encounter today only represent a humble proportion of the myriad dainty dishes served at lavish multi-course banquets.

Out of thousands of Vietnamese dishes, over half are said to have originated in imperial Hue.

The central region, nestled between high mountains to the west and the ocean to the east, is also home to many ethnic minorities. Going from north to south, food gets heavier and spicier, extracting flavors from dried seafood, shrimp paste, chilies, and black peppercorns. Dishes are often served in small portions, due in part to the intensity of flavor: hot, peppery, and zesty from the first bite. 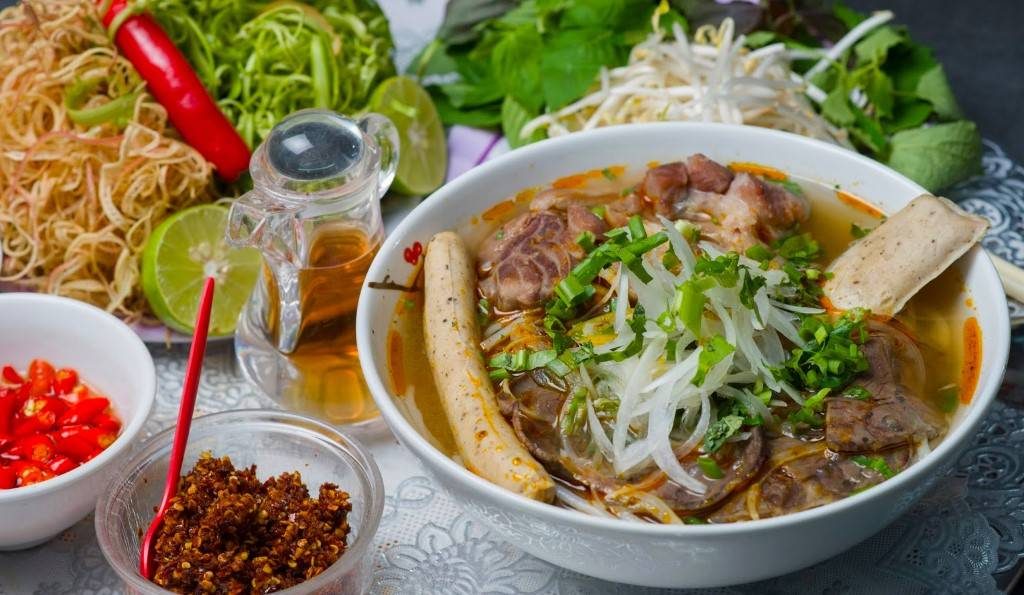 An absolute flavor tour de force, this “brash and angry angry bowl of soup” counts Anthony Bourdain among its disciples.

According to Bourdain, it’s the “greatest soup in the world.”

As Chef Robert Newton of Brooklyn’s Nightingale 9 puts it, “Bún bò Huế is soulful and rich and delicious and complex. It’s spicier than most Vietnamese soups. It’s just incredibly dynamic. I think it’s one of Vietnam’s greatest dishes.” 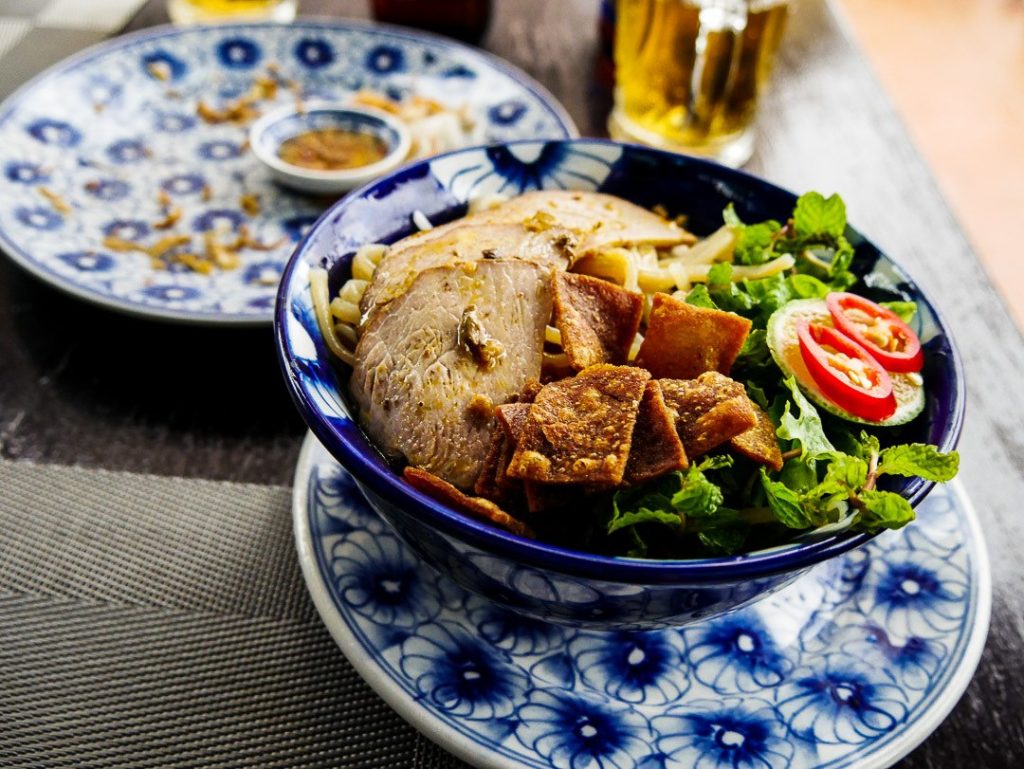 Cao lầu is Hoi An in a bowl. UNESCO World Heritage, former key trading post on the Spice Route, an atmospheric riverside town of incense-filled Chinese temples and Japanese merchant houses in central Vietnam, etc. in a bowl. 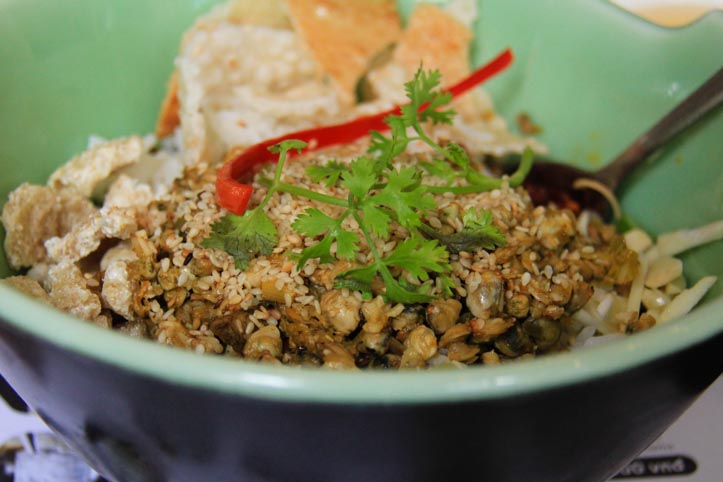 Cơm hến is a study in textures. Testament to the resourcefulness in Vietnamese food, this dish is sauteed baby clams served with shredded banana flower, herbs, fried shallots, peanuts, and pork rinds.

Everything is served over cold, firm rice so as not to wilt the greens. According to Thanh Nien News: “Ultimately, cơm hến is said to be best enjoyed with a mouth on fire. As such, it’s served up with a triumvirate of spice: pureed chili, minced chili in fish sauce and fresh chili slices.” A song of spice and fire, if you will. 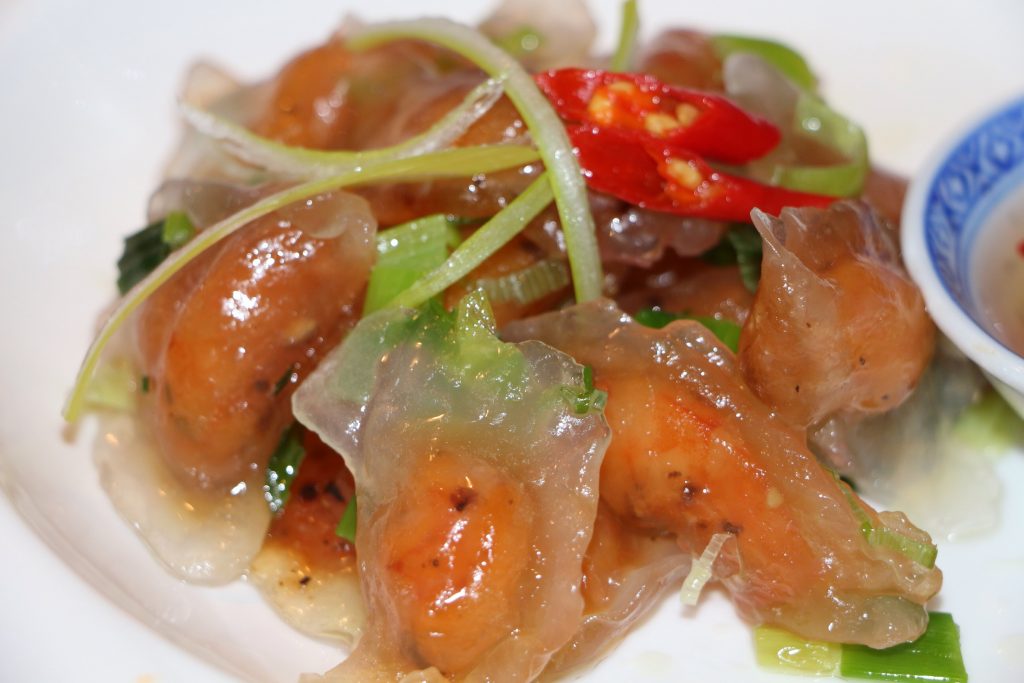 These clear dumplings are made from tapioca flour, which becomes translucent and subtly chewy when cooked. A joy to eat and to prepare. 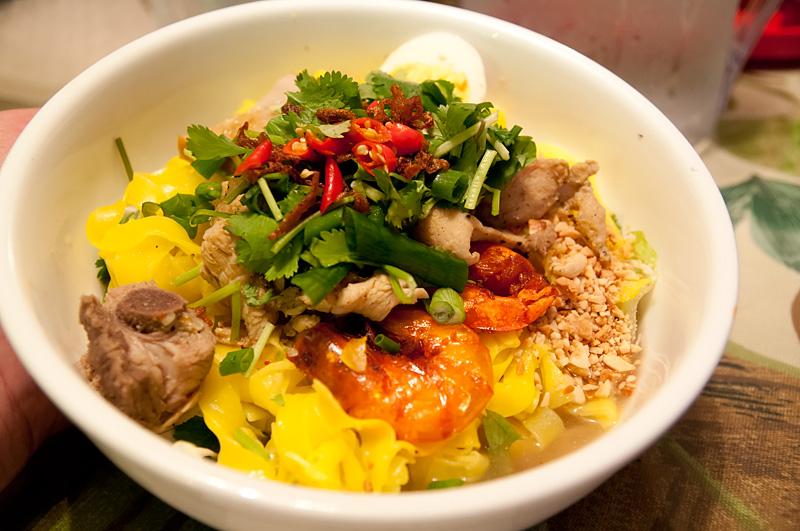 Part soup, part noodle salad, this scrumptious dish is so satisfying to eat thanks to just enough broth to bring all the yummy bits and bobs together.

Where to get it in Saigon: Mì Quảng Ngon Phố Thị, 50A Dinh Tien Hoang, District 1

Saigon – a melting pot of culinary influences – runs on the power of sizzling, steaming street food. Chinese, Thai and Cambodian cuisines all contribute to the sheer audacity of flavors here.

While spicier than food in the north, southern dishes also carry a subtle sweetness: sweeter noodle broths, palm sugar for caramelizing and braising, and generous amounts of coconut cream in everything from rice crackers to desserts.

Blessed with year-round tropical weather, the proximity to the sea, and a lush Mekong delta, the southern region is home to vibrant dishes lavished with seafood, vegetables, spices, and fresh herbs. 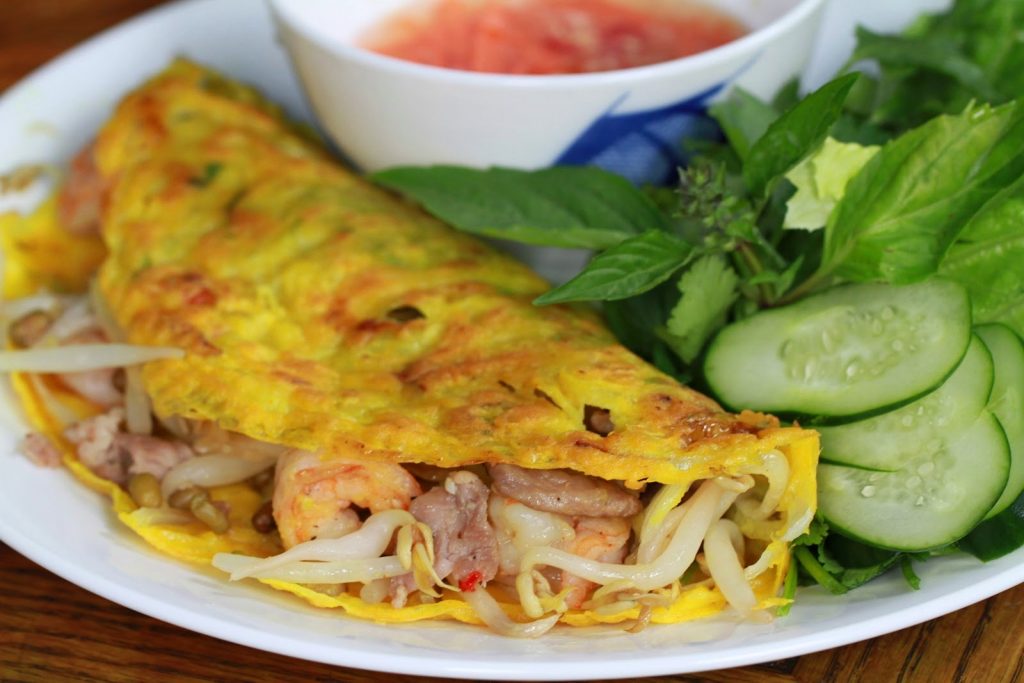 Savory, crisp-edged, pan-fried “sizzling cake” stuffed with pork, shrimp, mushroom, and heaps of bean sprouts. When in doubt, use with chopsticks, but this dish is best eaten with your hands.

Where to get it in Saigon: Bánh Xèo 46A Dinh Cong Trang Street, District 3 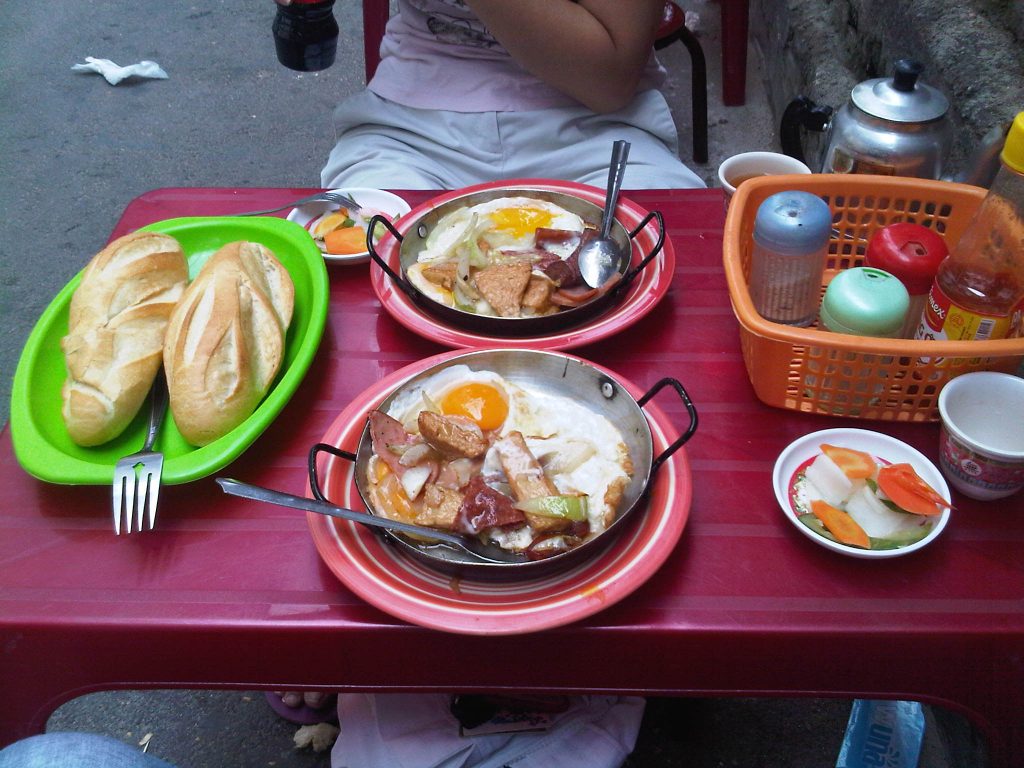 A true street hero. Everything goes when it comes to what you can stuff into a bánh mì.

But how about those slippery clear dumplings? I’m glad you asked, because bánh mì bánh bột lọc – a Franco-Chinese sandwich that takes Vietnam’s finest royal cuisine to the streets – is here and it’s delicious.

Where to get it in Saigon: Bánh Mì Hồng Hoa, 62 Nguyen Van Trang, Ben Thanh, District 1 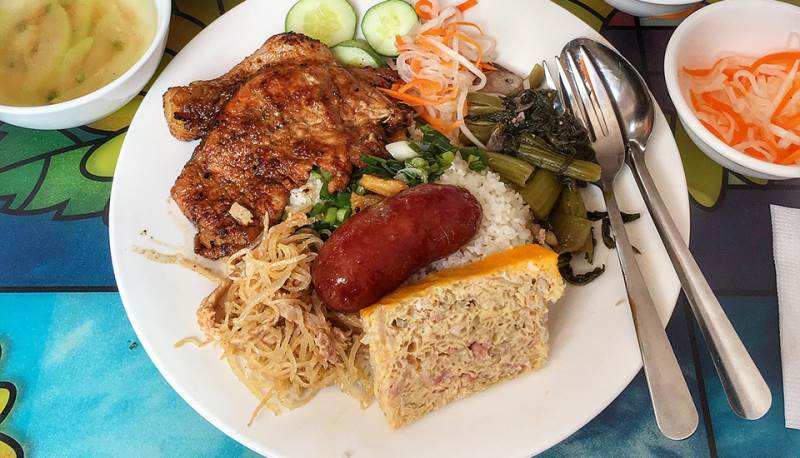 In the past, broken rice grains left over from the traditional milling process were very hard to sell due to their imperfections. The ever-resourceful rice farmers saved the broken stuff for themselves and made the most out of it.

Where to get it in Saigon: Cơm Tấm Ba Ghiền, 84 Dang Van Ngu, Phu Nhuan District 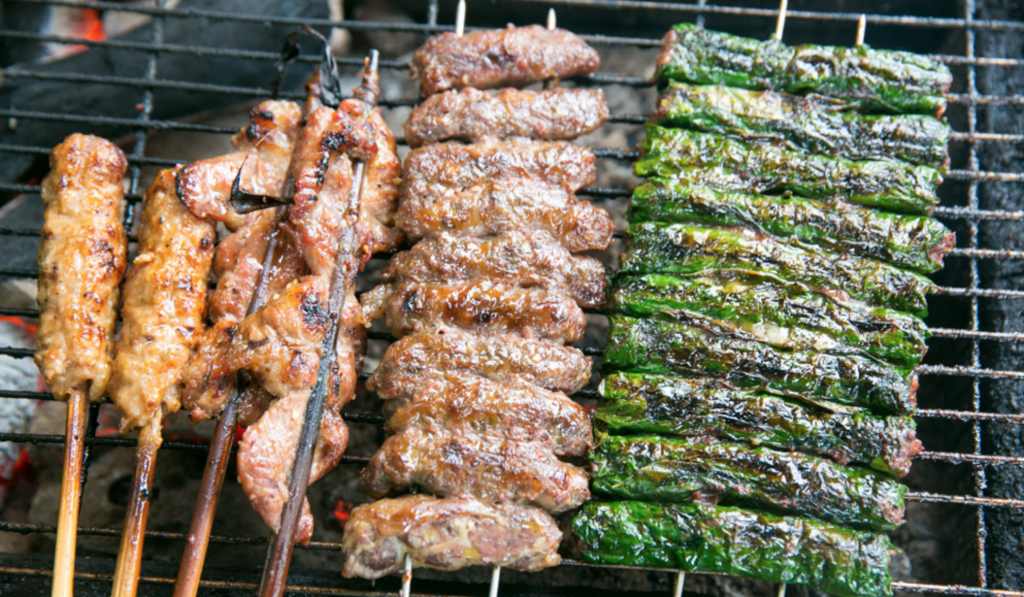 Here in Saigon, you can eat the world off a bamboo skewer, on the back of a bike.

An absolute must-eat when it comes to Vietnamese food, bò lá lốt is minced beef mixed with garlic and shallots, wrapped in wild betel leaves (lá lốt), then grilled over hot charcoal. The slightly charred leaves lend a peppery, herbaceous flavor to the beef while locking in all its juices.

Best eaten as is (read: off the grill,) this flavorful treat can also be enjoyed with vermicelli, wrapped in lettuce, with crushed peanuts and scallion oil. 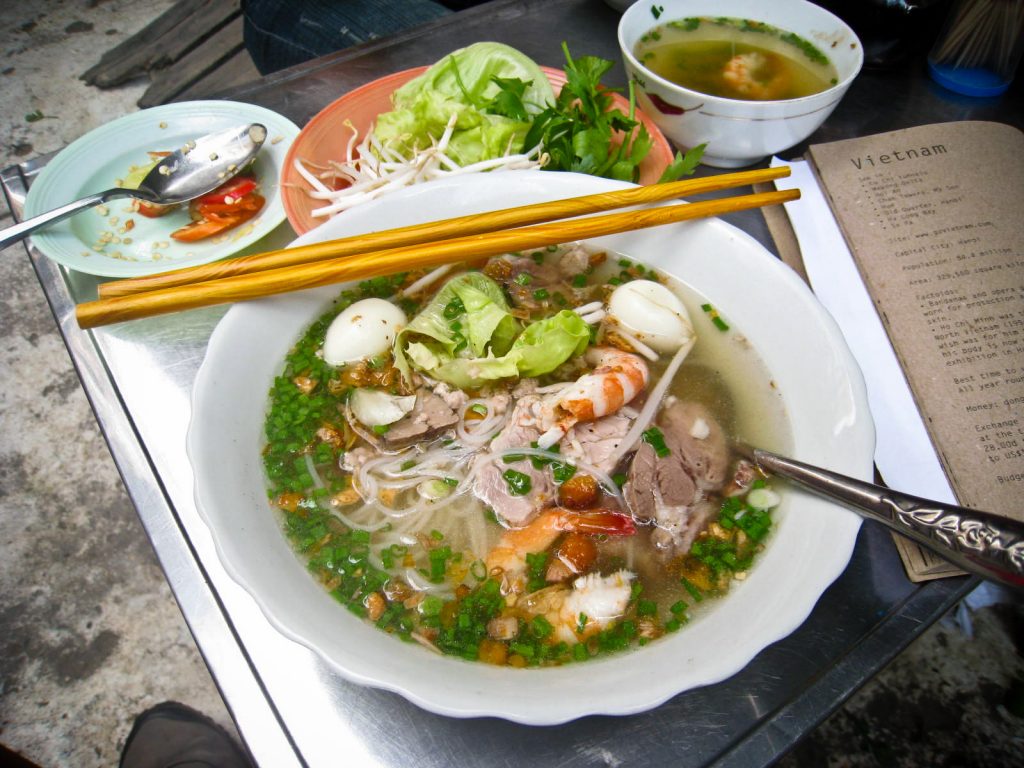 Its literal name is Phnom Penh Chinese noodle soup. Yet hủ tiếu is to the south as phở is to the north, and bún bò Huế to the central region.

An embodiment of the south’s broad-mindedness, hủ tiếu doesn’t have a classic, textbook formula. According to Andrea Nguyen, author of Into the Vietnamese Kitchen and food writer extraordinaire: “Hủ tiếu is the extreme have-it-your-way Vietnamese food experience.” You can have it dry, “wet”, or with soup on the side.

Where to get it in Saigon: Hủ Tiếu Nam Vang Quỳnh, A65 Nguyen Trai, District 1

READ OUR OTHER GUIDES 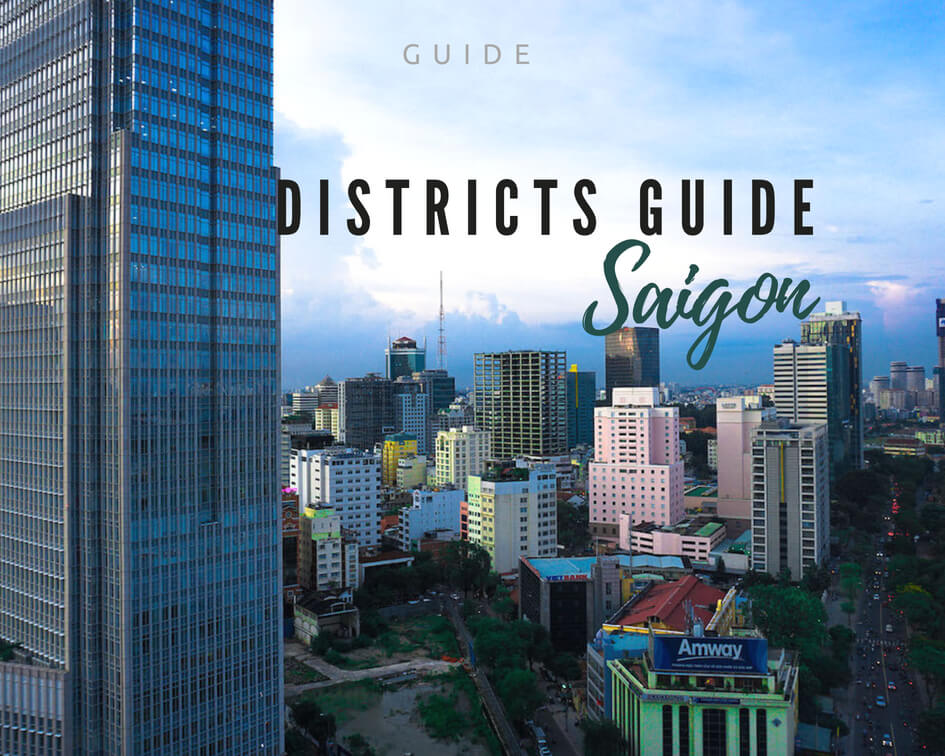 Your guide to Saigon districts: We help you find the perfect neighborhood for your next home with our selection of Saigon coolest districts! 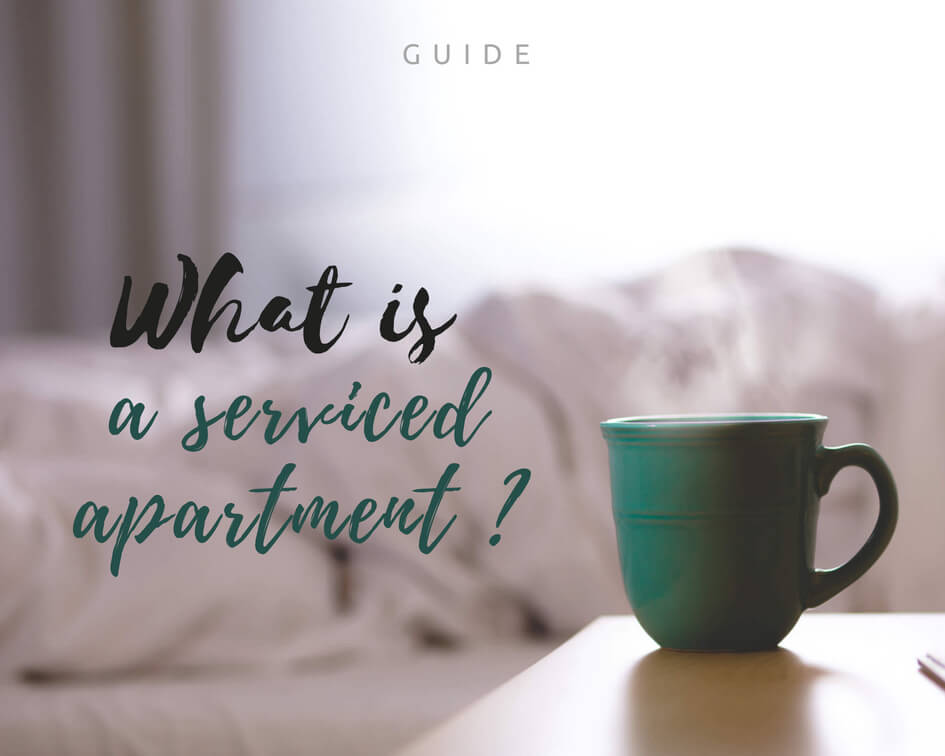 What is a Serviced Apartment? 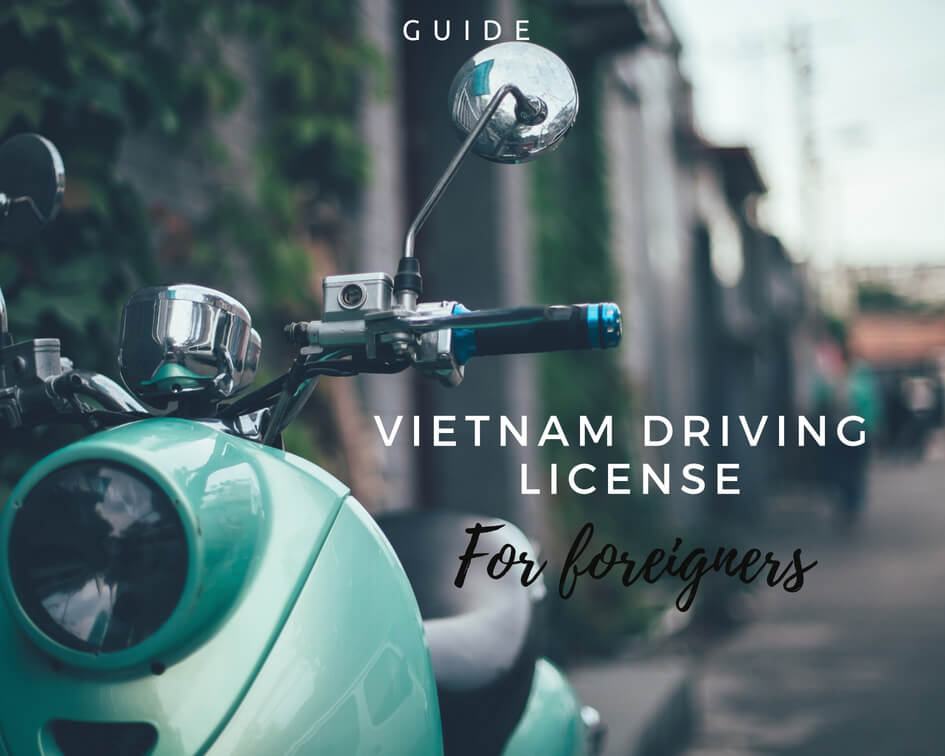 Most expats do not bother to get a Vietnam driving license. However, it is simpler than it seems and can save you a lot of headaches!